The Reply of the Communists: That is not the 70 million which will take you down! [EN] 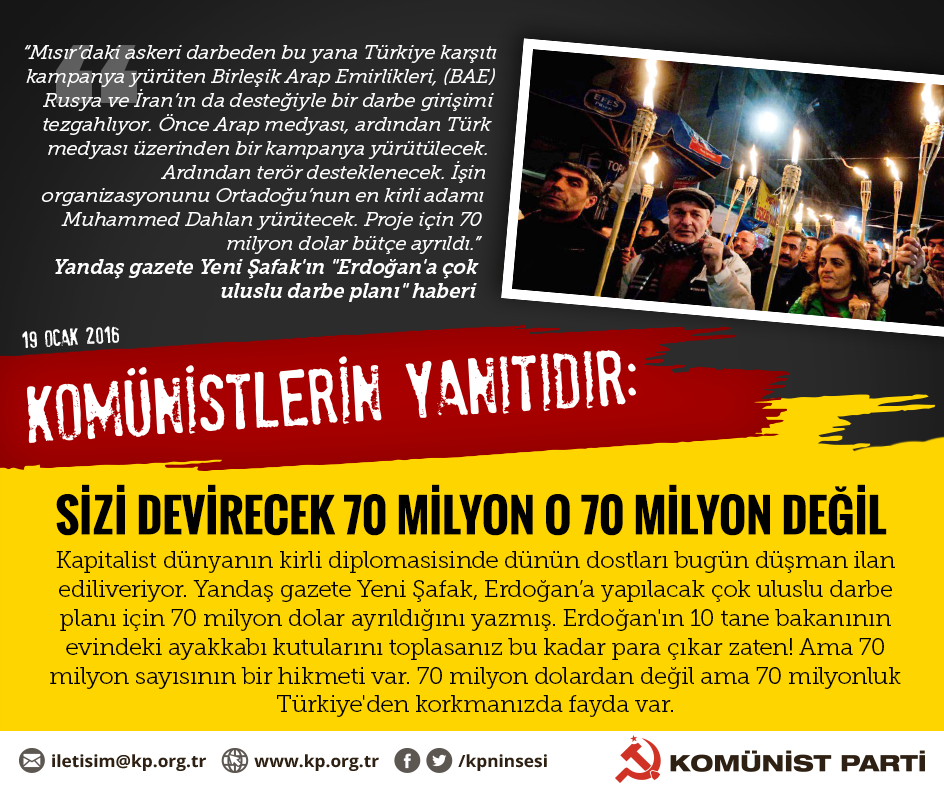 In the corrupt world of capitalism, yesterday's friends may become the enemy suddenly. The advocate newspaper Yeni Şafak writes about a fund of 70 million dollars for a multinational coup plan againts Erdoğan. If you add up the shoe boxes in any 10 of Erdoğan's ministers' houses you end up with that sum anyway! Yet that 70 million has a meaning as a sum. You should be anxious about the 70 million people in Turkey not that 70 million dollars.

"The United Arab Emirates (UAE), which continues an anti-Turkey campaign since the military coup in  Egypt, has been involved in organizing a coup in collaboration with Russia and Iran. They plan to carry out a media campaign first in Arab world then in Turkey. Middle East's most corrupt man, Muhammed Dahlan will lead the operation. 70 million dollars have been devoted for the project." says the 'A multinational coup plan against Erdoğan' article at advocate newspaper Yeni Şafak.

REPLY OF THE COMMUNISTS

That is not the 70 million which will take you down!

This is the dirty diplomacy of the capitalist world! The Saudi and AKP could be partners in provoking war in Syria while confronting each other in Egypt. That is how, the claim "The UAE has a deal with Russia and Iran to take Erdoğan down" becomes possible. The "magnificent" Abu Dhabi, the Arab city which they could not praise more, suddenly becomes "the hub of treacherous plans".

It is true that, the countries which call themselves the Islam world, can cook each other's goose when time comes. Because, the only common moral of that Islam world is nothing else but the US Dollar.

That's why it is not easy to argue the claim telling there are some in UAE who would wish to end Erdoğan's power.

The only thing which is apparently arguable in the advocate paper's claim is, that budget of 70 million dollars.

If you add up the shoe boxes in any 10 of Erdoğan's ministers' houses you end up with that sum anyway!

We are talking about a gang which reveals its 10 billion dollar budget for precaution in case their power gets into trouble.

A government which claims they have 4 billion dolar funding for creating partisans at June elections only in one small city, Düzce...

With 70 million dollars, you can only buy one or two low profile ministers in a government that sells out the biggest national resources of the country via billions of dollars worth privatizations.

Yet that 70 million has significant meaning as a sum.

You should be anxious about the 70 million people in Turkey not that 70 million Dollars.

Furthermore it is not hard to foresee the help desks which will be held in Abu Dhabi for you when that 70 million mobilize and also how that 70 million of Turkey will knock down those desks...