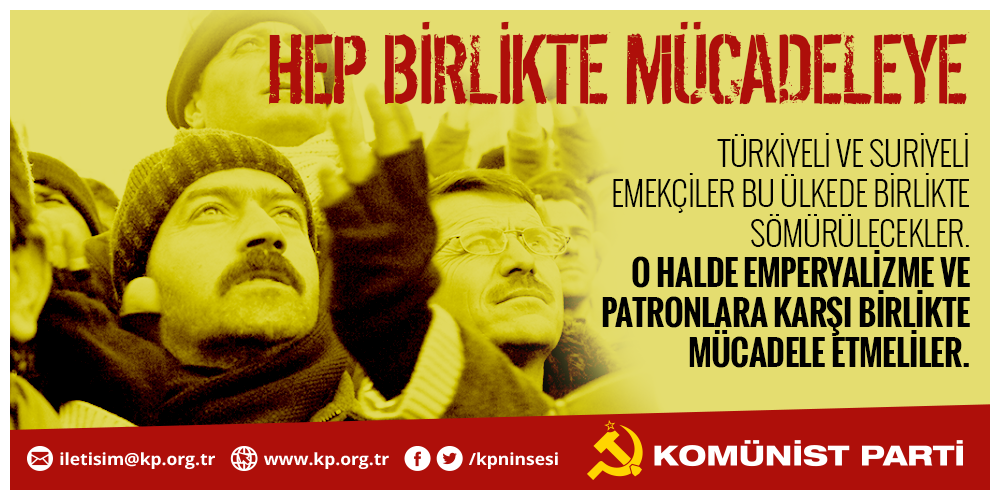 Let us struggle all together!

There is to be a war killing hundred thousands of people just next door to us, in Middle East, and there would be no trace of it on the working class of Turkey, is it so?

Moreover, here in this country there is that government, one of those war provokers, could it be the other way?

As if no arms were transferred to those sharia fighters beheading people; as if they were not freed from the border gates; as if the injured jihadists were not treated in our hospitals; as if their so-called commanders were not welcomed in five star hotels… AKP is the one who plans and runs this war.

Almost 3 million Syrians who had no chance but to take refuge in our country are the deepest victims of those crimes of that war.

Now AKP is trying to cover its guilt by those refugees. They are offering things such as, citizenship and work permit like favour, they are trying to give lessons of humanity here and there.

AKP is not just trying to cover its guilt but also to benefit more with just one cause.

Firstly, they want to create a mass of cheap Syrian labour in all the sectors.

Secondly, for the sake of the stability of the order of the exploiters, they are creating a new opponent from the Syrian refugees to keep them away from struggling side by side with others against injustice, deterioration of the rights, layoffs, reduction of the wages, longer working hours, increase in occupational diseases and murder by work accidents.

There is a big trap at this point. There is the trap of creating hostility between the sides who have no one but each other to depend for struggle. Once again they are calling out racism and chauvinism. The workers of Turkey should not been trapped.

It is true that the Syrians are employed informally in many sectors, yet, they have nothing to do with the reality of the persistent insecure, precarious and unregistered working life of Turkey.

Yes,working hours are getting longer, unemployment numbers are increasing, real wages are decreasing, regulations degrading the labour rights starting from the seniority compensations,are being implemented. By all those, the capitalists are trying to create a problem-free world for exploitation. Those attacks are being implementing by leaving the workers unorganised and not confident in themselves. Besides, the refugee workers are instrumentalized for exploitation and attacking the working class.

The trap right here is accepting the Syrian workers as the cause of the losses. You cannot oppose the Syrian labourers instead of the actual possessors of the rights!

The fight of the workers, our fight, is not towards our Syrian brothers/sisters.

Our fight is against the imperialism which condemned the Syrian people to hunger, poverty, begging at foreign doors.

Our fight is against the bosses who benefit from the refugee workers for doubling the exploitation.

So, we will struggle.

If we are being exploited together,  we will struggle together.

We will struggle to collapse the fundamentalist alliance and the imperialist conspiracy in which the ones who govern this country are also involved. And we will struggle for people to live freely and independently in their own countries.

Until that day, we will struggle for them, not to be used as cheap labour and against the possessing of the rights of the working class.

So, we will get organized.

If we are being exploited together, we will get organized against this exploitive order.