The reply of the Communists: You are in war with the laicisim, the fraternity, the willpower of people! 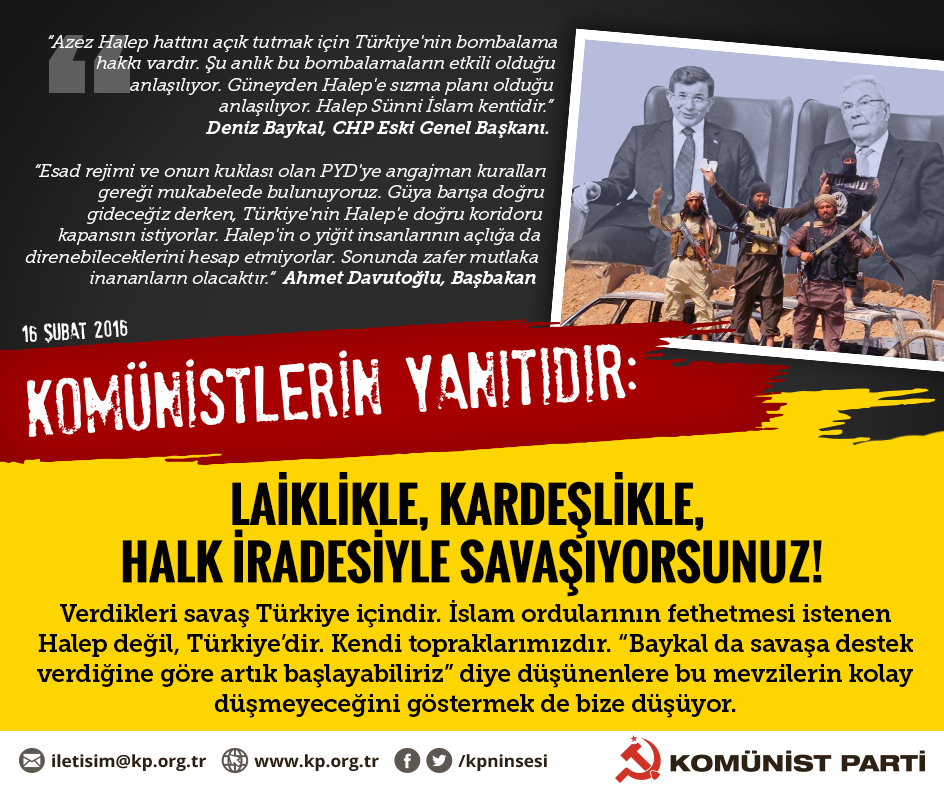 The war they are involved is aiming for Turkey. The Islamic troops are expected to conquer Turkey not Aleppo. Our own land. It is our job to show that these emplacement would not fall easily to the ones who think: " Since Baykal has also supported this war, we could begin“.

“Turkey has the right to bomb in order to keep Azaz-Aleppo line open. Those bombings appear to be effective by now. It is obvious that there are plans for penetrating Aleppo from South. Aleppo is a Sunni city.” Deniz Baykal, Former Head of the CHP (main opposition)

“We are reacting Esad and his puppet PYD due to the engagement rules. They want to close the gate through Aleppo for Turkey while calling it a march to a so-called peace. They don't reckon how the brave people of Aleppo can as well cope with hunger. Eventually the victory will belong to the believers for sure. “ Ahmet Davutoğlu, PM

The Reply of the Communists:

You declare war to the Laicisim,the Fraternity,the Willpower of people!

He was in the lead setting the sectarian, pro-Sharia, pretensious Ottoman dictator on us.

He was on the platform at the demonstrations where "Turkey is secular and will stay like that" slogan had been chanted. He was making statements, was storming at the parliament.

We hear that slogan no more. Not because he is not on the platform.

Turkey is not secular anymore.

And the Republic of Turkey, which is expected to become a Sharia state step by step, is governed by war lovers, warmongers.

Aleppo is not the main target in this war. Syria is not the main area on which they declared war with Saudi princes, oil sheikhs who nourished their wealth exploiting people.

Their war is aiming for Turkey. The Islamic troops are expected to conquer Turkey not Aleppo. Our own land.

They are talking about "the gate through Aleppo form Turkey". Is there any legal gate left at the Syrian border, conforming international law! There is not one legitimate link between Turkey and Aleppo!

They say Turkey has stood up against international forces, to Russia, to USA. How could we credit the ones as "national government" when they say "we are ready for land operation in Syria, just waiting for approval form US"!

The issue is not Syria. It is not the Kurdish question either.

The obuses, missiles, mortars, fired from Turkey by AKP's order...

Those are not stroking the Kurdish forces in Aleppo anyway.

They stroke the emplacements of laisicm, fraternity, independence, which are trying to defend their last resorts in Turkey.

It is now our job to show that these emplacement would not fall easily to the ones who think: " Since Baykal has also supported this war, we could begin“.