The Reply of the Communists: If only you would have learned your lesson from that “sick man” [EN] [ES] [DE] 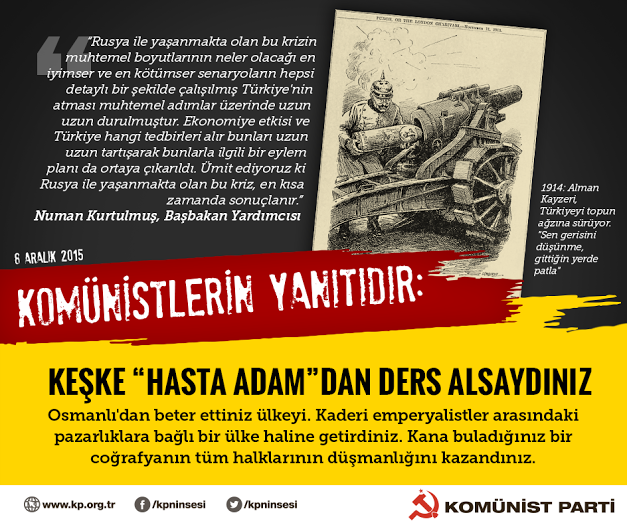 “ All the probable best and worst outcomes of the crisis with Russia have been assessed and all the possible steps which may be taken by Turkey have been worked over thoroughly. What effects of these will be on economy and which measures should be taken have been discussed carefully and an action plan has been formed accordingly. We hope this crisis with Russia will be over at the earliest”
Numan Kurtulmuş, Deputy Prime Minister

The Reply of the Communists: [ES] [DE]
If only you would have learned your lesson from that “sick man”

Ottoman’s downfall was an extended one. Ottomans survived a century extra. It is because the big states couldn’t decide how to share it. Eventually the Ottoman collapsed and dissolved.

European press had given the Ottomans a haunting name: “The sick man of Europe”. Super powers were protecting them from each other while waiting for their share at the same time. That’s why, the already declining Ottoman empire survived after “the end” point.
During the Russo-Turkish War, Russian reached İstanbul gates at today’s Yeşilköy district. England threatened Russia saying “We will intervene if you walk in İstanbul”, by this means, in 1878, Ottomans was rescued by another enemy who did not want them to be snatched by Russians.
Today, AKP’s Neo Ottomans have carried Turkey to the same point.
All the so-called friends and enemies now prefer to protect Turkey, which has been turned into a chamber of horrors in the hands of AKP, from each other instead of damaging it.
Erdoğan has a point in imagining himself as Sultan Abdülhamit.
The point he and his gang do not get is the fact that we will make them pay for carrying this country once again to the position of being “the sick man of Europe” after 100 years.,
Workers will call those, who bestowed one more time a “sick man” to this land, to account.