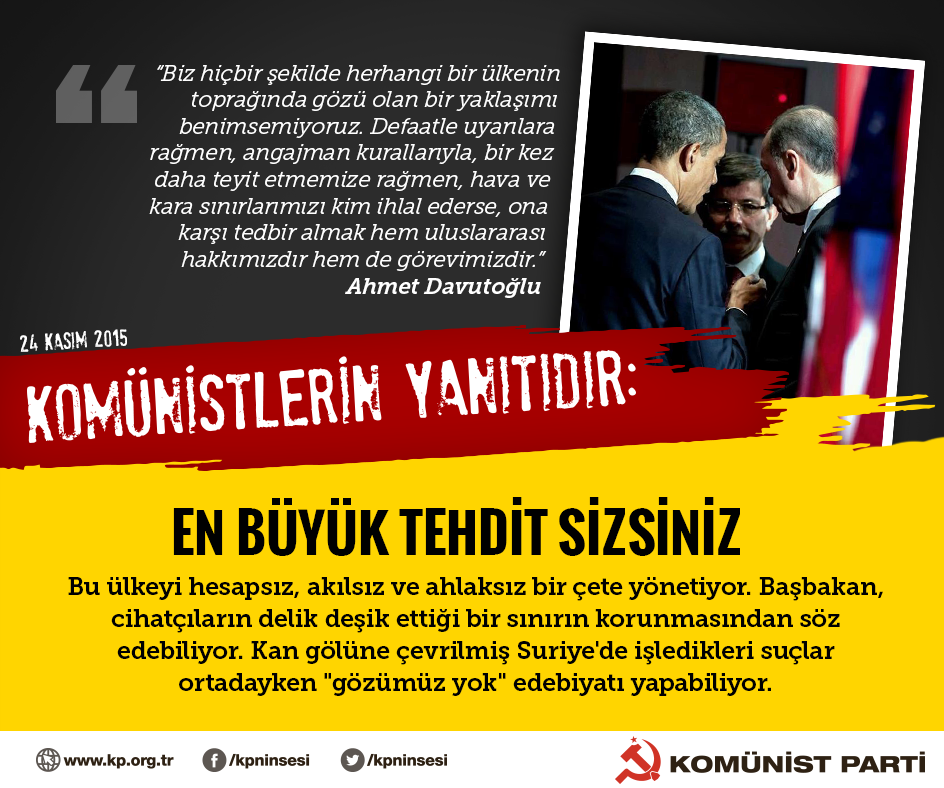 “We completely reject having eyes on any other country's land. After recurrent warnings, according to engagement rules, and inspite of all confirmations, it is our international right and duty to take any measure against whoever violates our air or land borders.” Ahmet Davutoğlu, Prime Minister

THE REPLY OF THE COMMUNISTS: [ES] [DE]

YOU ARE THE BIGGEST THREAT

A gang rules this country: a gang which is mindless, irrational and immoral. Today, we have witnessed this once again.

Turkey's southern borders are under severe violation. ISIS gangs pass through these borders; oil convoys sponsoring dark Islamist savageness and Erdogan's family pass; jihad squads pass who are requitted in our cities; TNT blocks pass to be blown up in our city squares; wounded jihadist psychopaths pass to be cured in our hospitals... And the Prime Minister chatters about 'whoever violates our air or land borders'.

All state officials in Turkey have been mobilized, from the top to the district governors, to aggrandize the war and massacres taking place in our neighbouring country Syria. And the Prime Minister shamelessly utters about 'not having eyes on any other country's land'.

Our country is indeed under a big threat.

This threat is posed by the reactionary coalition who supposes that making Turkey the guardian of Islamist gangs is "the foreign policy" and who fancies that dragging the country from one adventure to another is a show of sovereignty. The greatest threat we face is this coalition of AKP, associated with ISIS, Arab Sheiks, Al Kaide and numerous intelligence services.

Therefore it is irrelevant whether the Russian airplane did violate our borders or not.

Whether NATO, who twists this reactionary gang ruling our country around the finger had a role in this attack, and approved the attack or not; whether it leaves Erdogan alone or not. After a certain point, those are of no importance.

Whether Putin, who acts according to his own plans and interests is really the emancipator of the region's peoples or not, is of no importance.

What is important is, the right of the Syrian people and its legitimate political presence to protect itself from the Islamist terror.

What is important is, the right of our people to get rid of war mongers and impertinent gangs.

What is important is, to fight against imperialism and reactionism; to change the order of this system.