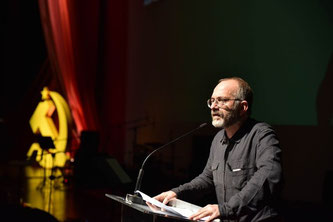 After the Ankara massacre, the oddity named Mehmet Barlas* had "relieved" us then with the following words:"Get used to bombs, this is the Middle East". There are regions where people need to get used to violence and blood and then there are "sterile" regions, is that so? Given the amount of excerpts from Erdogan in the piece he wrote after Paris attacks, it is clear that this palace clown could not figure out what to write this time.

Not just massacres, but hunger and to poverty... one can not get used to any of them!

Number of deaths worldwide due to starvation has reached 8 million per yer. How is one expected to get used to this? Go and ask a mother in Sudan if she "got used to hunger"... But since hunger is not prevalent in Paris, and hundreds of thousands in London, Berlin and New York are surviving for the moment, digging the street trash for food, it does not get on the public agenda. And the 50 bodies that were decimated by a bomb that exploded in a market in Baghdad is a news piece not more worth than a single column for the "civilized" world...

But why is this the case?

Because, before anything else, there is something called imperialism. International monopolies rule over almost everything from economy, to media, to arts and culture market, social perception. Or at least they attempt to. They would like all that happening in the rest of the world condemned to poverty to be reflected in the Western societies with the sentiment "Let's be thankful for what we've got". Anything more is dangerous. They won't let the ads of the food monopolies be overshadowed by the death of 8 million due to starvation!

Imperialism inculcates not only the rich class but all the layers of the society with the feeling of "privilege". This is something beyond nationalism. Western societies have been turned into fanatics of stability and calmness. This is to the extent that millions are ready to trade their freedoms for an exchange of stability. In this environment, their lives are more important, more valuable. They believe in that. That is why the bomb exploding in Paris resonates much more than the drone attacks that slaughter poor people in Pakistan.

Additionally, since the emergence of the bourgeoisie, humanity is in the hands of a Euro-centered approach. In short, the standards of civilization are defined there and thanks to those who came from there, also in the U.S.! Why should a security problem in one of the capitols of Europe, a relatively "small" continent, and a bomb that explodes in the country of Mehmet Barlas have the same impact?

This is pure immorality. It is the propaganda and fabrication of the damned imperialist centers.

However, there is something that goes beyond that point: Europe also happens to be the center of the most developed working class. This is the case historically; every period the class struggle intensified, say 19th century Germany, one of the phenomena that left its mark on the continent was without doubt the proletariat. And it is not immorality that the proletariat creates, it is the struggle for equality-freedom, it is courage, it is solidarity!

It is such in the objective sense too. Even today's the working class in Europe is relatively more organized, it has one way or the other some form of class consciousness, it is more condensed and is reinforced by immigrant workers.

It is such in the ideological-political sense too; if the working class around the world is to rise up and reclaim humanity, the proletariat of Europe is bound to play a special role in this. We have the experience from 20th century, when the working class is defeated in Europe, in the final analysis it is defeated as a whole even if it scores victories in other places. This is the case because the opposing capitalist class is settled there, it is solidified there.

The claim that there is another Europe is wrong, the Europe of labor has been invented to serve as the breath of life for the capital. Today, Europe is the Europe of the monopolies and that Europe has to be destroyed.

That the bomb attack in France catches more attention than the one in Nigeria can only be excused by the following: A working class movement to rise in France will also help with the suffering of the poor and hungry in Nigeria.

But if you are not raising this class struggle, if you are still going around concepts like marginalization, Islamophobia and instead of pushing forward the class struggle, you are hiding behind words such as tolerance, multi-culturalism, you are immoral.

If you cannot admit the class behind ISIS, you do not state loud and clear how Obama, Hollande and all the ladies and gentlemen of England and Germany have handed humanity over to fundamentalism, terror and militarism; if you have no radical objections to the thesis that it is possible to collaborate with the bourgeois to save the civilization, then you are immoral number one.

In that case, the expression "no discrimination based on language and religion" is nothing more than a tool to normalize the grave problems of the capitalist world, in other words nothing more than the whistling past the graveyard. If the explosion in Paris is not to be interpreted as the call to rise up in Europe against imperialism, the international monopolies and the capitalist exploitation, if the myth of "we are all on the same ship" will be circulated once again to lull people, you may be better off enlisting in the charity organizations as a volunteer as you may at least be the remedy for the suffering of a couple of hundred people!

The only privilege of living in Europe is the privilege of owing humanity. Europe will pay this debt only when its working class rises up, standing against international monopolies, E.U. and NATO.

As far as that mission goes, the communists in Turkey are Europeans all the way; apart from that, they don't mind being easterners, highlanders or islanders.

*Mehmet Barlas: a columnist for a pro-AKP daily, a true career liberal. He was an instrumental tool for AKP as he consistently provided liberal cover, helping legitimize AKP's rule.